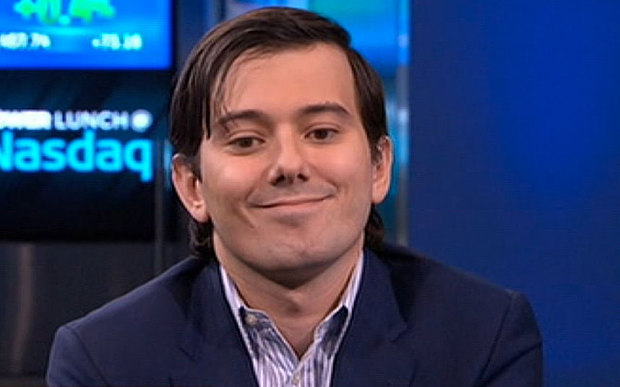 Every time Martin Shkreli answers a question for an interviewer on television, he smiles creepily before the camera shuts off. It’s not a smile of attempted benevolence, or an inflamed erection of his forced humanity, but more of a grim praetorian spasm, a sociopathic twitch. There’s something unsettling in his comfortable insanity. It reminds us of Patrick Bateman peeling off his mask in American Psycho, or Robert Durst confessing the murders under his breath in the HBO miniseries The Jinx. For a flash there, we see Martin Shkreli the man, the pomaded madman who masturbates to videos of pigs squealing and glaciers melting, his nostrils flaring, his mouth contorting as he pulls nearer to ejaculation. Everything else is just theater.

When the 32-year-old founder and CEO of Turing Pharmaceuticals skyrocketed the price of Daraprim, the out-of-patent drug from the early 1950’s used to treat toxoplasmosis, AIDS, various cancers, and malaria, from $13.50 per tablet to $750, the Internet shit itself. Overnight, he went from being a banal rich kid to “the most hated man in America.” Initially, Shkreli seemed to welcome the controversy like a bit of unexpected fanfare, replying to tweets with a sardonic in-your-face sense of victory. When asked how he sleeps at night, he replied, “You know, Ambien.” When a journalist tweeted, “I think the hole you’ve dug is deep enough,” he simply and beautifully replied, “uh, f u.” He said the medication was still underpriced, offering cheap puns about him making a killing from the slowly dying. But in the days since, the Pharmaceutical Research and Manufacturers of America (PhRMA) disassociated themselves with him, and Presidential hopefuls Bernie Sanders, Hillary Clinton, and even the orangoutang fuckery of Donald Trump have ridiculed Shkreli’s actions. Every media outlet, every politician, every alcoholic blogger has made a point to vilify Martin Shkreli as this week’s whipping boy in our paradise of storm and hell.

And for good reason. Shkreli is clearly vilifying the sick, capitalizing from an already crooked system, and should be condemned by the masses of Internet automatons, counting their Facebook likes on their most recent Shkreli meme. This public outrage crops up every now and then, as if we need to point to someone, and yell “Him! It’s his fault! It’s his fault the world is fucked! It’s his fault my love life is horrible!” But eventually the clamor fades, and that person returns to his or her damp morsel of life. Walter Palmer, the lion-killing dentist lasted a minute, and has since returned to picking out the plaque from 13-year-olds’ fetid mouths. The Kim Davis controversy is fading away, as she is now shuffling around her office peacefully again. Bill Cosby has returned to making weird faces to himself in the mirror. Darren Wilson is somewhere. George Zimmerman is selling his paintings of Confederate flags in an anti-Muslim gun store. Josh Duggar is touching Barbie dolls. And eventually Martin Shkreli will return to his quiet grotesque desert, gnawing on a bloody steak, nothing ever changed in his beige empire of dick.

When the media obsesses over figures like Shkreli for a day or two, or this past week when Pope Francis visited the United States, thus monopolizing all media attention, it seems as though the Syrian refugee crisis is no longer a crisis, or Russia’s involvement in Ukraine and Syria is of little public importance, or climate change is no threatening us at our front doorstep. It’s the media’s own attention disorders, or maybe it’s our own.

In a way, it looks as though this time it’s different, that the public has gained a bit of ground, as Shkreli recently said he would reduce the price-hike to a lower undeclared amount “in response to the anger that was felt by people.” One may even argue that if the public rallies hard enough, if it writes enough inflammatory blogs, or posts enough memes, that it will pressure bad men to make good choices, that there will be some sort of vague democracy, that all our indistinct clicktivism will bring about another chance at decency. After all, Internet activists released Shkreli’s OK Cupid profile, his home address, his telephone number. His ex-girlfriend posted his messages he wrote her five years after they were separated, saying he’d pay her $10,000 to lick her pussy. $10,000 for a bit of wet nostalgia. This is revelatory in itself—it shows the shadow of the insane, another symptom of the power-and-slave dialectic. Nietzsche’s concept of kraft versus macht in his Will to Power, is, as everyone knows, where Martin Shkreli has failed. Humans’ will to power is the central motive to our lives, scrambling for the highest position in life, in which kraft is an agent’s primordial animal strength and is then channeled or overcome by the Self, the finesse of power known as macht. But for Shkreli, he is all macht and no kraft. He flexes the body he doesn’t have, like a madman with Klinefelter syndrome. He wants to control the world but he is a desperate teenager who can’t get girls.

Noam Chomsky called today’s GOP—of which he hesitates to call it a party—a “radical insurgency.” We know the madness of today’s GOP at least partially stems from a religious fanaticism, from a rejection of the constitutional separation of Church and State. Martin Shkreli and the cult of the sociopath are a little different.

When madness, hysteria, and misery creep in through a shadow, and somehow fester and copulate until they are as normal as ugly people in the Mid West, when the incest of paranoia tramples the landscape, then groups of people who once governed with reason and decency become the occupants of the madhouse. Martin Shkreli is not one of the rare awful fucks of human beings to hold power (and in this case the health and lives of thousands of people), but merely a single member of the huge scale of madness and gluttony.

Based on varying studies, anywhere from one percent to four percent of Americans are psychopaths—unable to empathize with others, increased risk taking, superficial charm, and skilled manipulation of others—whereas an estimated ten percent of those in the financial service industry are psychopaths. Then of course there is the steep increase of almost psychopaths—the darker shade in the continuum of personas. No one has officially diagnosed Shkreli as a psychopath, but it doesn’t really matter. His actions are clearly without empathy for human life.

Demonizing Shkreli is important only because it gives a face to the problem, because we can identify the features of the guilty, because it is not enough to discuss Foucault’s Madness and Civilization or the constructs of commodity fetishism. It’s not enough to say “dismantle capitalism” over and over again, but it’s not enough to demonize only Martin Shkreli himself. Eventually, we will forget about him, and others like him will pop up in their various perversions of power, commanding the sick or the gay or the black or the women to bow before them and suffer. And we will remember Martin Shkreli, offering his ex-girlfriend $10,000 to lick her pussy, tweeting privately to his mother: “I am under attack [frustrated face emoji]. I need inspiration. I need inspiration to create the empire of AIDS and cancer and micro dickpics I’ve always wanted. But most of all, I also need thinspirations for my yoga body. btw, I cheated and got extra croutons on my Caesar salad. [wink face emoji, girl dancing emoji].

And Martin Shkreli bashes his head into the padded white walls, asking for more soup.