(Originally published on http://www.paradiseofstorm.tumblr.com on October 16, 2014) 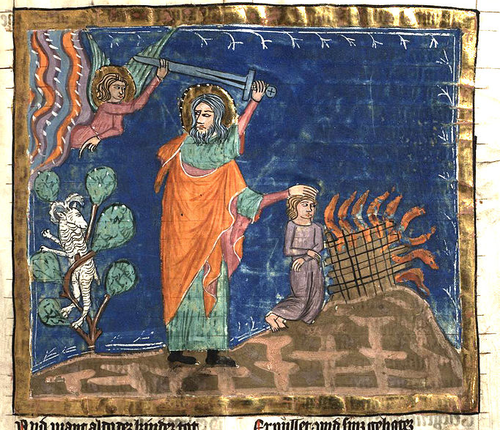 The spider hung from the elm tree from one thread of silk, about to cast its web as the buff cornfed scenes of the middleclass passed by, humming along in their Priuses, squinting into the setting sun, or staring intently into their own private glowing rectangles. The sky could only sigh with fabulous ennui as the cloudless weight of another torrid sapless evening rolled in. It hadn’t rained for months, and before that it was just a distressed cough of moisture that fell rather than rained. The pigeons still limped as usual—that didn’t change with the drought—and the humans were still achieving their various tasks of import, like driving around getting ‘Thank You’ cards, or picking up soy milk, or buying Halloween preparations, or attaching a 1977 filter to an image of their 2014 life. Various scenes of normality ticked throughout the biscuit-colored towns: a cat tossed the headless body of a mouse around on the sidewalk; a boy wearing a huge helmet bicycled towards Main Street, then stopped to pick his nose; a man sneezed as he collected the mail in his bathrobe. The setting sun warmed all the west-facing stucco walls of all the track houses throughout all those endless miles of suburban bourgeois happiness, and the sprinklers were soaking another lawn, their expensive drops flying and pummeling the little ants as they tried to run for safety from their exhausted flood. The banausic hum of humanity was wrapping up another day.

A blonde lady wearing her favorite leopard-print fedora—she had several—pulled into her driveway in her red convertible mustang, and reached down to reposition her panties between her short skirt. She took off her sunglasses, looked at herself in her rearview mirror, and sighed. She didn’t know it, but the Universe really didn’t care for her. But she had a half-emptied baggie of Prozac in which all the pills were crushed into a fine mephitic powder, into which she scooped a sizeable bump with the long red fingernail on her pinky finger. After sucking in all that ashen voodooed happiness, she pinched her nose, wincing, feeling the sting. Her fingers dripped with blood, and she mumbled a bad word, and wiped her nose with her hand and looked in the mirror again, and her whole upper lip was smeared with blood, and she heard voices and footsteps and rustled around to find a tissue that was still clean.

Mrs. Freeman looked up, her leopard-print fedora crooked on her head, her big Jackie Kennedy sunglasses hiding her tears, blood dripping sweetly from her nose. O hello Aaeesha, she smiled. Aaeesha means Life and Vivaciousness in Arabic, but Mrs. Freeman had always thought it a queer nondescriptive word, like Shampoo or Scissors. Aaeesha stood there, looking sweet but concerned, her eye still healing, her thin mauve burka tickled in the evening breeze, her two young children hiding behind her dress, and she offered Mrs. Freeman a tissue.

The spider paused to watch the two women interact. He didn’t know anything about race relations, or the recent clamor to be the most politically correct, or the recent televised debates about the intrinsic misanthropy within Islamic religious belief; he didn’t know which pew poll was most accurate in describing Indonesia’s support for Sharia Law (some estimates are in the upward range of 70 percent); he only considered Nietzsche’s fifth book in The Gay Science: We do not by any means think it desirable that the kingdom of righteousness and peace should be established on earth (because under any circumstances it would be the kingdom of the profoundest mediocrity and Chinaism); we rejoice in all men, who like ourselves love danger, war and adventure, who do not make compromises, nor let themselves be captured, conciliated and stunted; we count ourselves among the conquerors; we ponder over the need of a new order of things, even of a new slavery for every strengthening and elevation of the type “man” also involves a new form of slavery. The spider considered for a while as he strung his gossamer thread from end to end, as the patient Darwinian clock ticked away, pausing, watching as Mrs. Freeman accepted the tissue, excusing herself for yet another unsightly occasion, wiping her nose and trying again to smile to the children.

Mrs. Freeman and Aaeesha are part of that very rare breed of animals who don’t fight the setting sun to stay alive, who don’t still lurk the sodden currents for a drink of water, or dig away in caves with their squatting ape-man tribe. They fuck once a week, water their grass three times a week, watch Youtube videos of cats befriending owls, and search for the best parking spots at the gym—in other words, they’re just two regular ‘ol ladies trying to kill time before time kills them. Because once food and water and shelter and sex are won, Misery leads you to the shrieking grave. Wars are the obvious choice—they’re the easiest burdening romance to fix any boredom. Ferdinand Celine described it as “the minions of King Misery,” as he slopped in the shit-ridden trenches with his other Frenchmen, throwing bullets towards the Germans, screaming obscenities through the night. ISIS isn’t raping women by the thousands, or burying children alive, or beheading American journalists for any reason different than the US is bombing innocent villages in Yemen, or outsourcing their kill lists to Somalian warlords, or funding the Israeli occupation at an average rate of $6.6 million a week for the last 66 years, or funding and training deathsquads in Latin America, or establishing worldwide regimes of torture—they are violently bored nihilists who already wish they were dead themselves. Nietzsche pinpointed this over a century ago, arguing that our love for “danger, war and adventure,” didn’t arise out of intrinsic barbarism within the human animal, or within religion itself, but rather out of our need to never be captured. War is the collective scream to rid the Self of boredom, to assure that the Self will never be captured. It’s one last attempt to fuck the arid landscape before the sun goes down.

Last week’s debate on Real Time with Bill Maher, including Ben Affleck and Sam Harris, in which each other passed blows on whether or not some humans enjoy death and pillagery more than others, resulted in a long maelstrom of intellectual bitchfights, including Glenn Greenwald, Reza Aslan, some guy named @dan_verg_ and many others, all trying to yell who and what is more violent. As the impish grunting ape-men who so patiently evolved into high-fashioned bristled intellectuals of late night HBO talk shows argue about if Islam is intrinsically violent, they are all doing the same thing: merely trying to kill before being captured, trying to wear wings on the delusions of animals. Aspiring intellectuals still debate whether or not Hitler or Stalin’s epochal venom had anything to do with being anti-religion. But Hitler was also a vegetarian, making a dangerously good case that vegetarians are potentially evil centaurs at heart. He also enjoyed petting his German Shepherd, Blondi, posing the threat that dog owners are annoying life-killing Archfiends. But within religion itself, after “the crusades, the multiple blessings of wars, warrior popes, support for capital punishment, corporal punishment under the guise of ‘spare the rod and spoil the child,’ justifications of slavery, world-wide colonialism in the name of conversion to Christianity, the systemic violence of women subjected to men” (Violence in Christian Theology), and after Haun’s Mill massacre and the Mountain’s Meadow massacre, after countless kidnappings, suicide bombing, mass murders, assassinations, airline hijackings, in which only Communism as an ideology is responsible for more deaths and violence than Islam, after Israel really fucked everything up for everyone, turning to Deuteronomy 7:1-2 or Deuteronomy 20:16-18 or several others to follow explicit instructions from God to the Israelites to search and destroy other tribes, after countless tribes conducting human sacrifice and religious self-flagellation, one might begin to wonder if religion just maybe have the possibility of somehow or someway be related to violence across the world. There was the Constantinian shift, embroiling Christianity with government. There was the Christian persecution of paganism under Theodosius I. There was the Roman Inquisition. There was the Muhammad cartoon crisis, resulting in mass violent protests, including the burning of European embassies, death threats, even an attack with an axe on the cartoonist himself. During the siege of Beziers in 1209, a Crusader asked Papal Legate Arnaud Amalric how to tell the Cathars from the Catholics, to which Amalric replied, “Kill them all; God will recognize his.”

As for ISIS’s relation to the core teachings of Islam, Ben Affleck and Sam Harris are saints of reason, probing us to look ever deeper into the dark glory hole of religion: pew polls suggest a 99% support for Sharia Law in Afghanistan, 74% support in Egypt, 91% in Iraq, which would involve death to apostates, stoning of adulterers, and chopping off the hands of thieves. On the other hand, many leaders of ISIS have been held captive at one point in U.S. military prisons, something that the photos that leaked from Abu Ghraib don’t suggest helped U.S. relations with radical Islam. Reza Aslan, a Muslim himself, assures the world that Islam preaches neither peace nor violence, (even though the ISIS leaders have repeatedly turned to the pages of the Quran to justify their actions). Sam Harris wishes to believe that if religion ceased to exist altogether, there would be peace. Glenn Greenwald is just stoked he’s selling books now. And Ben Affleck already slept with J. Lo, so he really doesn’t give a fuck. What they’re really debating though, has nothing to do with radical or normal Islam at its core, but rather why man will never fill his lust for “danger, war and adventure.” By Lacanian theory, the whole point of this desire is to never reach it. A kingdom of righteousness and peace was never meant to be reached in the first place (which is why Muslims must die rightly in order to reach their paradise of virgins) . . . Lacan argued that wants and needs can be achieved with a rather urgent ease, but desire is the eternal elusive lust that we must always pursue but never catch. By pursuing his kingdom of righteousness and peace, man will create his wars, his little swelling torments of belief, his tragic flatulence of salvation. It’s the ape who throws the most feces wins.

Man loves his war in troops. He loves his slavery in droves of bleeding Prozac trolls, everyday another heartbreak as the sun sets and the sleepers fall asleep. Too bad, too bad, too bad.

As Aaeesha and Mrs. Freeman part ways, and head to their happy private lives, a fly catches in the spider’s web. All eight legs move him across to the writhing desperate fly, and he begins wrapping him in a spool of silk, tickled in the evening air.