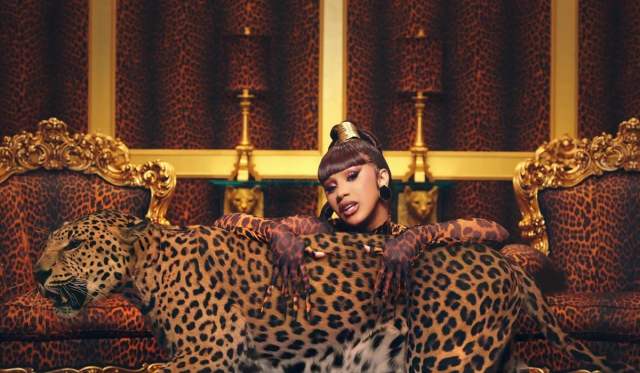 Something terrible happened to Ben Shapiro last night. It was a dream, a vivid mirage puppeteering against his eyelids, a nightmare so realistic and awful that it jolted him awake. He was trapped in Cardi B’s new hit single, WAP (Wet Ass Pussy), trapped in the music video version that he watched too many times in preparation for his show of conservative male punditry, until it crept into his fluttering subconscious. Like Freddy Kreuger dressed as an unindividuated series of black women unfurling their curves in glossy leather lingerie. “Yeah, you fuckin’ with some wet-ass pussy, Bring a bucket and a mop for this wet-ass pussy…” Shapiro clambers through random doors along an eery and brightly hued hallway, opening and slamming them closed again. Cheetahs licking their upper lips clean; cartoonish renderings of bedizened door knockers unwrapping themselves as serpents opening their jaws; the floor rushing with a clear pungent fluid that’s clearly not water. Ben runs, stumbling over himself as he splashes his way down the hall, but he trips and falls, skidding to a halt. Cardi B and Megan Thee Stallion stand over him, blocking the exit, singing in their hypnotic gaze. The walls seem to close in. “…In the food chain, I’m the one that eat ya, If he ate my ass, he’s a bottom-feeder.” Shapiro screams. “Macaroni in a pot, that’s some wet-ass pussy.” The pornographic and predatory grotesquerie sends a sleeping Shapiro into wide-eyed convulsions. He’s awake, trembling, whimpering like a beaten dog. It’s okay. It was just a nightmare.

But what’s this? He looks down and sees that his penis is erect, warm with blood, like a chihuahua that perks his head up because he has heard a creak in the walls. But it’s not erect with arousal—certainly not sexual arousal at least—he is absolutely certain of this. He does not get aroused, and has devoted his entire life to a sexless devotion of political monogamy. Yes, surely it’s just an anatomical glitch of cellular walls filling with blood because he was sleeping. And the woman sleeping next to him (his “doctor wife” as he refers to her) is laying there peacefully like a frozen plank, arms locked at her sides, breathing heavily, as she always does. He slips out of bed, and steps onto the cold marble floor, sending a shivering rush up his legs. His legs of course are just pale tree trunks stripped of their bark—knobby sun-deficient rods of hairless death. His toes resemble more a deck of miniature penises, sprouting mangled weeds atop. He stares down at them, wiggling them, giggling in his iconoclastic squeaky way. In fact, his toes are not miniature penises at all—he has dressed them up to look exactly like those talking bullets in Who Framed Roger Rabbit, each one unique from the others, with a cowboy hat and a fake mustache different from the next. He murmurs something to his toes under his breath, and checks to make sure his doctor wife hasn’t stirred. He looks back to his toes, and smirks. Then frowns. This is unusual—this whole “erect penis” thing—unusual and unwanted.

The cold floor hasn’t subsided his erection, and it still prods awkwardly from his silken pajamas with patterns of Spongebob and cartoon bananas littered across them. “Hmm,” he thinks softly, staring at this strange edifying protuberance in his pants. “This doesn’t seem right. No. No, not right at all,” he whispers. He walks across the floor and into the hallway and then into the kitchen, where he dips his genitals into a cereal bowl of yoghurt and ice cubes, his penis cresting out of the surface like a submarine breaking through the Antarctic ice sheets. It’s no use. His erection is sturdy and everlasting. He begins spiraling into panic, his lips quivering, bubbles of snot glugging with volcanic slurry. “Wha-wha-what is this?” he asks nobody. “Wh-why is my pee-pee hard? I don’t want a hard pee-pee!” He scurries back to the bedroom in short, rapid steps, yoghurt splattered on the bullseye of his crotch like the residual fog of a huge firework. He reaches his doctor wife still sleeping like she was in a cryogenic chamber, and violently shakes her awake. “Wife! Hey wife!! Wake up woman, I have an erection!!!” Her eyes open with a thud—immediate and callous, her pupils instantly sharpening into pinpricks against hazel circular tapestries.

“What did you say?” she declares coldly, not moving an inch.

“It’s not a boner, you idiot. As a doctor, conventional wisdom tells us this is a penile tumescence, or being the early morning, happening in your sleep, nocturnal penile tumescence, something that occasionally happens in young men, as yourself.” She begins to close her eyes again, but is interrupted.

“So it just fills with blood, and there’s nothing I can do except wait it out?!” He’s sobbing now. His eyebrows are making violent undulations, his lips curling and uncurling themselves.

“It doesn’t just become engorged with blood. It’s not a balloon animal. When nitric oxide is increased in the trabecular arteries, causing them to dilate and then fill the corpora cavernous to fill with blood. But you also want the blood to stay there, so at the same time of dilation—”

“Well it’s quite interesting, because both the ischiocavernosus and bulbospongiosus muscles constrict the veins, which permits only the blood to only stay in the vicinity of the penis. Like beavers building a dam, if you will…Speaking of beavers…”

“What the f word is wrong with you? Have you gone completely mad? Next you’re going to tell me vaginas get wet when aroused.”

His voice squeaks. “That joint where a woman’s legs meet, you know, that indiscernible mold like on a Barbie doll. It allegedly gets…what’s the word? Ugh. The M word. You know, it rhymes with foist [he shudders with revulsion], but it starts with an M, hence the M word. Is that what you’re telling me?”

What makes Ben Shapiro truly horrific, is you know his prudeness is real. You know confidently that he has never even thought about the writhing ecstasy you can give a woman by going down on her. He has children, but you know there’s at least a notable chance that his wife’s eggs were fertilized in vitro—that there was no sexual intercourse whatsoever. I grew up very religious, and my father was something equivalent to a church pastor; but when I found my parents’ Kama sutra booklet in their dresser when I was six or seven years old, I remember feeling some indiscernible relief. Maybe some muted respect, or understanding, as much as a runny-nosed six year old is able to feel. Even in my childish naiveté, it humanized my own parents, doing their acrobatic 69’s or whatever they did back then. Other republican lunatics who get caught getting blowjobs through public bathroom glory holes, or Jerry Falwell Junior who watches his wife get plowed by the pool boy—there’s a redemptive quality in these stories. We mock them for their religious hypocrisy, but at least we find a glimmer of humanity in their perversions. Because the sweaty blood-choked limbs of our libidinal fatigue always wins in the end. The religious folk are at war with the flesh, and when the armies of nipples and scrotums and oddly shaped cocks and pussies come marching over the the grassy knoll, singing their war songs with trumpets and drums, you know they will always win. The scrawny trembling lines of Bibles and holy books and discarded cassette tapes of church hymns gets mauled by bludgeoning cocks and big hairy pussies with studs around their cartoon wrists.

And although Shapiro has undoubtedly never seen his wife’s own asshole, and probably takes pride in not being able to locate the clitoris—he is a one man show, a quivering and banal theater of prudeness—his outrage is obvious and performative. He was never actually angry about Cardi B’s WAP single. It’s a gleeful performative anger, like a parent who gets mad at their child for drawing a dick in their schoolbook, but then laughs about it with their spouse in private. Shapiro is snickering through all of this, because he gets to read dirty poems and pretend he is losing his mind over it all. It’s great entertainment. You want to send in requests: have Ben read James Joyce’s love letters to his wife, the ones about how much he loves her spluttering farts. (If you haven’t read these yourself, do it at once.) Have Ben read the dirtier scenes from Tropic of Cancer. Have Ben read Couples by Updike, someone who David Foster Wallace once described as a “penis with a thesaurus.” Even after all these, you come away thinking that Cardi B is better at writing about the erotic. Updike’s description of sex goes as follows: “Her slick firm body was shameless yet did not reveal, as her more virginal intercourse once had done, the inner petals once drenched in helpless nectar.” This is awful writing, and is laboriously painful to get through.

Shapiro behaves as if WAP is the first of its kind to sing poems about sex. He tweeted that his doctor wife diagnosed a wet ass pussy as either “bacterial vaginosis, yeast infection, or trichomonis.” His wife surely knows this, and he made the whole thing up. He later tweeted that he doesn’t mind being mocked for never making his wife wet because him and his wife know there’s more to a happy marriage than sexual satisfaction.

As Dostoyevsky writes at the beginning of Notes from the Underground, “I am a sick man. …I am a spiteful man. I am an unattractive man. I believe my liver is diseased.” It’s almost as though it’s a ventriloquist’s dictation of Shapiro himself. If he get’s his wife’s pussy wet, he risks even the momentary elimination of the suffering and pain that he and the Underground Man in Dostoyevsky’s book crave so much.