It’s hard to describe what Kobe meant to us without crumbling into barbarism. You sympathize with those who are all but required to make statements to the public—how they feel about it, what Kobe meant to them, and so forth—because you know that they face the cold and desolate realization that words are half-formed grunts, helpless ephemera twisting haphazardly through the storm. The moment one begins to describe him, calling him a great athlete, an amazing father, a real competitor, one knows they have already bastardized the cause. He was like a brother, many of his teammates and competitors have said. You know what they mean, and you know you couldn’t have done any better, but Kobe’s death proved the communicable radiance one person can have to so many others.

In his Oscar winning animated short film, Dear Basketball, Kobe begins with his childhood memory of rolling up his father’s tube socks into cotton mock-basketballs, and scoring the game winning shot in his bedroom. Millions of us did the same, and we did it because of Kobe. We tried our awkward best to emulate his chimeric temper, to celebrate alone or with our brother, arms raised to the invisible crowd, parents in the other room smiling at our budding innocence. And the point isn’t necessarily basketball. Virtually none of us grew up to be basketball stars, but it doesn’t diminish his impact on any of us, because heroes are never meant literally. He was the stuff of lore—like Hermes with his winged sandals, he flew almost horizontally through the air.

Regarding his death, I’ve heard so many others make rollover remarks about Kobe just being one more helpless victim caught under the rubble of an impartial world. It’s just collateral damage, so a few of the famous ones die from time to time. And yes, somewhere in the range of thirty-thousand people die every year in the United States by car accident. And none of us, besides the family and loved ones of the victims cared, much less even heard about any of them. I still don’t know the names of the other seven victims that were on board when the helicopter crashed. And if I did, they would sadly mean little more to me than prearranged Scrabble pieces that happened to form a name. I don’t tend to view death—including the cinematic and sudden kind—all that tragic. I’ve gotten into the unfortunate habit of promoting its meaninglessness, as if indifference was the unruffled and mature posture about these things.

But as usual, I’m wrong. When we mourn for one’s death, we do so because the vulnerabilities of our humanity have stepped out from their den. We’re forcefully reminded that the murderous days are impartial to our self-conscious esteems, and faced with the sudden truth we’ve know but necessarily ignored all this time that it could happen to you any moment of any day. Walking to the grocery store to get some eggs, and suddenly you’re gone, into the heap of eternity with all the others. All your anxieties, all your self-reverence and self-hatreds, all your tyrannical animal impulses and hypocrisies, all your stresses about the menial, vanished before you can appreciate this new perspective.

The closest I got was when sailing a twenty-six foot sail boat off some remote prehistoric islands in Norway, suddenly caught in a massive storm. There were five of us, all in our late teens and early twenties, with not nearly enough sailing experience between us all. We were on our way to a friend’s wedding on a further island, and I was already drunk. And in the initial moments of catastrophe, when the sails were torn to shreds and the cabin flooded and side railing ripped from its bolts, before the helicopter and the coast guard showed up to save us long haired and puking imbeciles, I privately shrugged at our own foolishness, with the resolute esteem that I had actually always been a part of the class of humans I loved to scoff at. I knew we deserved whatever miserable, frozen fate we got, that if our bobbing cork of a boat was finally swallowed by the sea, it wouldn’t have made much difference. I rolled my eyes at the prospect of my own death.

When we mourn for one’s death however, such as Kobe’s and Kobe’s daughter Gianna, we’re reminded that our chronic misanthropy and cynicism was a misunderstanding all this time. Sure, we humans are disposable beasts, but only in the statistical sense, which is not the complete sense. Kobe’s life, and his death, showed us not necessarily that life is worth living, but rather that it can be worth living. Our rambling days are grooves in the road we have paved. And beyond Kobe’s human shortcomings, he reminded us of the august decency worth achieving.

There are too many of us, packed too closely together, to notice each other hurting or in need. We are just ants, wishing everyone would get out of our fucking way. When my friends and I made the front page of the local paper for being saved in the storm, I could already hear the predictably defeatist puns being made about us, because I would have made them myself—that the aspiring hippies deserved to drown in the frozen sea. Let Darwinism work its magic; population control; skim off the dumb ones. That type of thing. Or, if I suffer through crawling traffic on the freeway and finally pass the cause—some mangled twisted body of a car, the passenger clearly dead, I too often see it as a totem of drama, something to gawk as we crawl by, see if we can catch a glimpse of a severed head. Or, I just curse, call them an asshole for making me late.

I’ve been told that when my grandfather died when I was four or five years old, I didn’t make much noise about it. But a couple weeks later, my cat was hit and killed by a car, and I cried for weeks. Rational preference didn’t tell us to mourn Kobe’s loss to the degree we are. It feels much more devastating than just one more death, because it is, for whatever reason. The death of our heroes is not just a saying. It’s not merely a concept in a movie we’ve been long ago jaded by. We have our individual and collective heroes because they make the drudgery of life more redeemable. They excite and compel the gods of lore to come down from behind their mythic clouds, and grace us with their greatest spectacle. However soft or invisible, they nudge us towards the direction of our dreams, and forces us to meditate on the unfurling events of our own days.

Stupidly, most of my heroes are writers. I haven’t cared about the Lakers since high school, and always considered professional national sports leagues as some residual sickly phlegm from our colonial days, where a fat white male owner collects his riches as the mostly black players battle it out like bond servants. But the truly great ones supersede even the most devoted cynicism. I loathe the temptation to make comparisons to Roman gladiators, but it’s in our blood to cheer for our favorite sinewed and sweat-drenched cavalier. To root for something so handsome in a world void of meaning. People get in the habit of saying that great spectacle—the movies, sporting events, the circus—are all just fugitive amusements, something to delight ourselves with to forget about our terminable days. Like a nursery chandelier of staggered accruements to awe at with wide-open eyes. But the animated puissance of an athlete as great as Kobe reminded us to push ourselves to live better than we are presently. His work ethic was unparalleled, and he was adamant about the notional truth that born talent only gets one so far. He would wake up at four in the morning to start training, every day. Now, here, it’s ten in the morning, and I’m still in my underwear.

Most of us are barely surviving. And regarding who achieves their wildest dreams, and who has to work three miserable jobs to pay rent on a dusty drywall cube, it’s sad and simply wrong that there’s a carrying capacity for such excellence. It doesn’t have to be that way.

In his last years, Kobe spoke a great deal about the importance of love, in allowing it to cast its net in broadly affecting ways. He did so in a way that meant something—you didn’t roll your eyes when hearing him talk about it; you knew he was being genuine, that he had actually felt and been humbled by the overwhelming subterranean ocean of whatever love is, the kind you feel on occasion when on powerful psychedelics. You saw it resonate, in the way he carried himself, in the way he spoke with and hung out with Gianna, courtside. You could see how positively affected by it she was, the way she laughed and smiled comfortably at his side. That whatever other matters of trivial importance fall to the wayside. 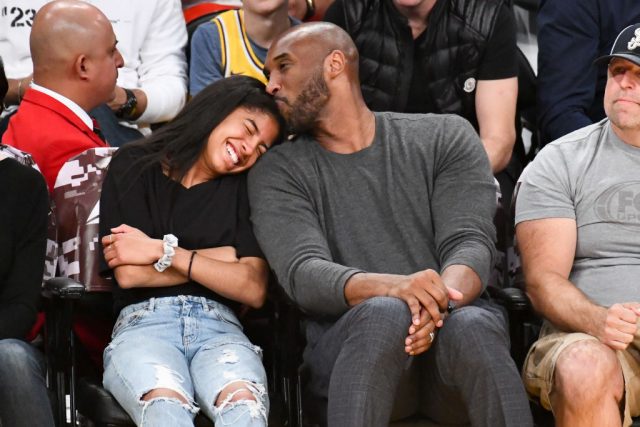