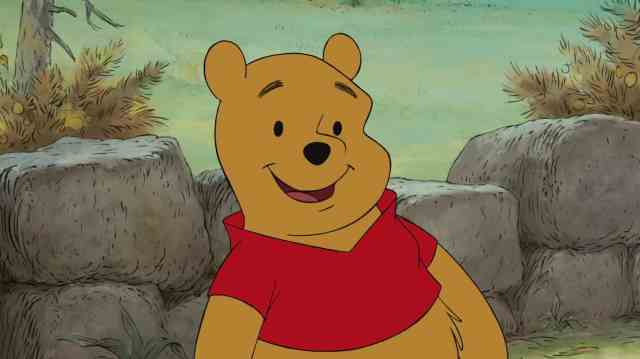 Before his death, a distinctly outlined orange sun sets behind President Xi Jinping, his ears flopping forward like a toddler’s mittens, his tiny red shirt riding up and sticking into the damp fold of flesh between his belly and his tits. He’s not wearing any pants. He never has; but there appears to be just a smooth golden fuzz where his genitals are supposed to be. The smoldering cartoon audience seems unimpressed, so he makes a wimpish attempt to cheer them up, the kind only the doodle of a bear’s gruesome acumen can muster. “Nobody,” he softly exclaims to the benevolent hues of green, and the many other countryside animals of opaque neons, “nobody can be uncheered with a balloon.”

It didn’t take long after images of Winnie the Pooh were banned in China because of his uncanny resemblance to their human leader, for other rulers of other countries to preemptively ban their self-declared animated body doubles.

Amid whizzing gunfire between the rocky throats of canyon, and across some indistinct expanse of desert where Syrian rebels bounce along in their military-retrofitted pickup trucks, the roads just rotted into boiling moats of asphalt and debris, not much other life exists. Perhaps a lizard or two, gasping under the shade of pulverized rubble and rebar; perhaps a lone mushroom, plunging upward in the center of an abandoned city, displaying the phallic victory of nature and her promised resilience. The bombed-out cavern of world echoes the muffled cries from babies, their mothers sifting through the spread-out hunks of concrete with antiqued gold miners pans. This part of the Middle East somehow turned into an awful proxy war, the final realization of Mad Max, with Turkey now invading northern Syria, completing the last orgy of death before the upper atmosphere converts permanently to sulphuric farts, and tendril-strings of superbugs rain down into our cereal bowls of gruel.

But there’s important issues to discuss. And so Bashar al-Assad, Vladimir Putin, and Recep Erdoğan convene in a dark alley, the walls fortified with garlands of rusted barbed wire and shards of glass. A distant organ player has passed out with his head fallen on three keys out of tune that only produces an excruciating barely audible dog whistle. It’s not peace talks their discussing. It’s not a plan to pull millions out from the charred misery. It’s both an allied and adversarial pact to ban all images of their closest cartoon doppelgängers.

Assad asks sheepishly if they agree to ban Mister Geppetto, Pinocchio’s father. “Oh, and both Super Mario Brothers. They all haunt me, and I’m not even Italian.” The others nod their heads as if this were obvious. Putin demands they agree to ban Porky the Pig. But he won’t even say his name. “Ze pinky,” he says over and over, as the other two make hundreds of random guesses until they finally stumble upon the correct answer, and Putin just closes his eyes slowly, and exhales silently. Erdoğan writes his on a piece of paper, and passes it to them. It reads, “Angelica Pickles, from Rugrats.” Putin and Assad grunt with amusement, the closest thing they’ve come to laughter since Assad dropped nerve gas in Damascus, killing hundreds of his own people. The beams of morning span the horizon as the rapid gunfire draws nearer, and the teeming nostalgia for the wild life becomes unbearable.

Then there’s Donald Trump. He sits hunched over in the Situation Room, the hump of his neck sprouting meaty beds of bleach-blonde hair, his earlobes flopping like sails in the windless sea, the glossy sheen of the lacquered oak table reflecting like a private bowling lane. He leans over the smooth reflecting wood, mimicking Narcissus staring into the still pond, trying to decipher his own resemblance. His pointed and sculpted tufts of eyebrows whipped into miniature waves, his scalded marshmallow face bubbling with hapless glee, crusted mounds of oatmeal coated the edges of his flared nostrils. And the awful trademarked hair woven into a spider’s Halloween thicket, with buzzards and carrion feasting on scraps of flesh inside somewhere. He wouldn’t give the trolls what they wanted. The casino-loser peasantry who only wanted to make him look bad, to subtract from his coruscating flex that swelled like the blood-packed erection of an Aryan wet dream. He would turn the task on its head, and make the people willfully not disperse the images of cartoon’s masculine heroes like Simba from The Lion King, Prince Eric from The Little Mermaid, John Smith from Pocahontas. “Etc.,” he wrote at the end.

What purpose is there for any effective resistance? In the 2016 election, it was initially reported that 11,000 people voted for Harambe, the dead gorilla. Although later proven an exaggeration (these types of votes are never actually tallied), Mickey Mouse is famous for being a favorite protest vote each election cycle. But the famed authoritarians of the modern world know better than to call it a protest vote amongst themselves. The literal manifestation of a cartoon hellworld is upon us, the squeaking and yapping laughter of episodic delirium, simply drawn animals with drooping snouts and eyeballs the size of frisbees, mocking its citizenry who are trapped in an overly saturated nightmare, running between a maze of galloping pianos the size of a city block, rugs heaving into tidal waves that are only trying to toss us by the bum into an empty flower vase the relative size of a skyscraper, so amidst this profane and formulaic squalor, some likable fanged beast can snatch us up by the tail and drop us into his mouth whole.

In the end, in a last ditch effort to bring peace, President Xi Jinping staggers aimlessly under his Winnie-the-Pooh costume. He came to the bombed-out streets of Hong Kong to greet throngs of protestors, clouds of lethal tear gas drifting low in their multi-colored sherbet flavors, another attempt to convince the kids that tear gas is fun and flavorful. All of the protestors were waving banners of their honey-loving god, riding the tops of huge automated floats of Tigger and Piglet and others. If he could actually become the buoyant and lighthearted protagonist of the celebrated bedtime story, maybe he could settle their unrest once and for all. At least, that is what he thought, stupidly. Because they weren’t here to protest the Chinese judicial system, or its encroaching mangled edifice of legislated doom; rather, they wanted the impostor to unzip himself, to step out from his sweaty and awkward disguise.

“Ooo whooo,” Xi Jinping muttered with fake jubilance from behind his Pooh costume, patting his belly of stained and rotten polyester fur. It was of no use. The throngs pressed in, beating him with sticks, pulling him from that panoply of failed innocence, naked and hog-tied by comic irony, his plump adorability now backfired without any chance of its reversal. Before everything went pitch-black and silent forever, before he could feel his gurgling lungs get drowned by the slow motion stomping of boots, a pure white butterfly balanced delicately on his wet nose, opening and closing its wings in the serene beauty of a cartoon. And Trump and the others gathered round, their makeup and costumes half finished, peering down at his limp body wasted away in the mud.

One thought on “When Kings Become Cartoons”