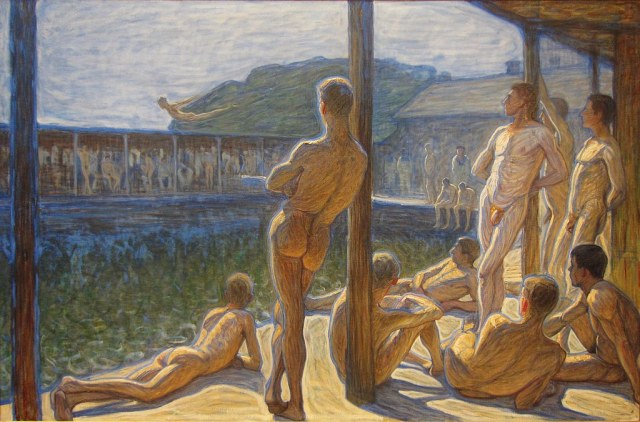 The following is the unannotated transcript of a discussion in a high-end bath house about the recent anti-abortion laws sweeping through several states of the country. SHARIA KENDOLL is an almost entirely hairless man, with a cavern of a dimple in the bullseye of his chin. He’s a pastor at a nondescript megachurch in Oklahoma not destroyed by surrounding floods, and has been struggling with depression and a test of faith after recently walking in on his only son watching Top Gun—a film of notorious gay propaganda—with another boy. JAY WALKIN’ DRACULA is a part-time sorcerer, and a big fan of spoiled meat and expired produce, who spends his free time shouting obscenities at stray cats and children walking to school. He has a pigeon named HOBBLES. MITCH MCCONNELL is also there, his face and neck sagging like plastered vomit passed his tits; his lips are entirely gone, so all that remains is a black hole, gasping like the violent and muted tremors of an asshole immediately after a gangbang. No one knows why he is here. He mostly just stares at the floor, and thinks about when he would tie worms in complicated knots as a child. JORDAN PETERSON, although Canadian, forced himself in the room for reasons unknown. He’s been on a strict meat-only diet for years, but now just throws a couple of dead pheasants on the table in the middle of the room, and sinks his teeth into them, feathers and all. CLARENCE THOMAS has a beard now, and scratches it furiously, and wipes his runny nose with the back of his hand. This has become a habitual tic. We begin.

SHARIA KENDOLL: So, um, yeah. Thank you all for coming. Thank you for gathering here, I mean. We’re here to discuss the recent abortion bills passing through such states as Alabama, Georgia, Ohio—can I get an “Oh, HEYOOOO!”?

This obligatory introductory attempt at humor falls to complete silence. The others are staring at the feet of MITCH MCCONNELL, where a pool of flesh-colored slime has formed around his ankles. He tries to speak, but his incoherent Southern drawl just splurts out animal sounds, like a cow giving birth in the hottest day of summer.

JAY WALKIN’ DRACULA: What the hell are we looking at? The man is melting. And he just moaning shrieks of death. Would someone put this poor bastard out of his misery?

SHARIA KENDOLL: No, no. He’s by no means melting. And don’t you hear what he’s saying? He’s mapping out a superbly fascinating strategy on how to win back the House. How can the Evangelical community—how can America—expect to win back the House, if we can’t get the houses of America to live by the law of God? We need babies now more than ever. We need babies to crawl out of their mommies already waving American flags. Gosh darnit! If I ever had an idea, by golly that’s it. Clarence, you’re a lawyer. What if you propose mandatory miniature American flags transplanted in with the babies in their little cubbies—what do you call those things?—those liquid jello-sacks they bob around in. Inside the mother…Anyways, we staked the American flag in the virgin soil of the New World, didn’t we? Well, maybe these mothers don’t want their babies because the babies don’t know they gonna be born in the United States of Awesome! Huh guys? Ammirite?

JORDAN PETERSON: Uh, yes, well, you see, to have American flags planted, Mr. Kendoll—I would like to extoll you the importance of uttering such unsavory mishaps as “trans” anything, as the young postmodern neo-marxists in America are trying to subliminally indoctrinate our minds with these bloody…these bloody words. And I’m not being rhetorical when I say that. Words do have blood, and I have sucked their throats…Anyways, transplanted is not accurate, as it suggests to the subconscious of the deep recesses of the mind that a man can make me call him a her. Well I’m not bloody doing it! Because next a baby is going to tell me it’s not a baby. It’s going to say it’s a booby, one of those blue-footed birds in the Galapagos. And on and on, until nothing means anything anymore. And we may as well not speak because these radical leftists have hijacked language, and then all of a sudden we’re trapped in a jetliner headed straight for the building of meaninglessness. [He starts crying uncontrollably. Then slaps himself across the face, falling to the floor, before eventually collecting himself, continuing as if nothing happened.] But anyways, these are complicated matters that just can’t be succinctly summarized in just a few phrases. As you were saying, put it in the woman’s, um, in her, stomach lining. Whatever it’s called.

CLARENCE THOMAS: No, not her tummy, you idiot.

JAY WALKIN’ DRACULA: Her midriff! The whores have midriff! That’s where the babies are.

JORDAN PETERSON: Thank you, in her midriff. To get an American flag planted in her midriff is no simple matter, Mr. Kendoll. And for starters, let’s be reasonable. America was never loved for being miniature. A big American flag represents big ideas, big freedoms, big trucks, slaughtered pigs the size of sumo wrestlers, and so on. The bigger it is, the freer we are. A dead cow, with her guts spilled across the floor—it’s a beautiful thing. It’s what I love most about your country—all the dead animals. What are we doing here talking about saving dead babies when we can be talking about the virtues of overflowing hog lagoons. They contain vital nutrients that the environmentalists conveniently ignore…[to JAY WALKIN’ DRACULA, pointing at HOBBLES] Are you going to eat that?

CLARENCE THOMAS: Plebeians! The last half of “friend” is “end.” It’s the bird’s fate to be eaten!!

[MITCH MCCONNELL’S neck is now just a flesh-waterfall that has finally reached the floor. His bellicose gargling suffocates him, and what’s structurally left of him falls to the floor, mimicking something like Gumby getting hit with a baseball bat. He’s probably dead, but no one seems to notice except for JAY WALKIN’ DRACULA, who looks around nervously at the others.]

SHARIA KENDOLL: This has been an extremely productive conversation. Justice Thomas, you always seem to declare such enlightening truths. We are all indebted to your lifelong commitment to the law.

SHARIA KENDOLL: Exactly. So, to conclude, Impossible Burgers and Beyond Meat are made from aborted bambinos. Little sprouts, I like to call them. Little buggers, for fun, when I’m feeling cheeky. You get the point. No, no: teenagers, with bad breath, actually. Ha! Ha! I crack myself up. Heck, may as well be graduates of West Point, fighting for the freedoms of the malnourished. Which is why all vegans are the infernal children of Satan.

JAY WALKIN’ DRACULA: This is awful.

SHARIA KENDOLL: I want to thank our sponsors, the protein smoothie startup Loaded Phlegm, and the nightclub The Pulse of God, found in your hometown—actually, in every living room—for making this conversation possible. Thank you all, and I look forward to sweating with you all next week.