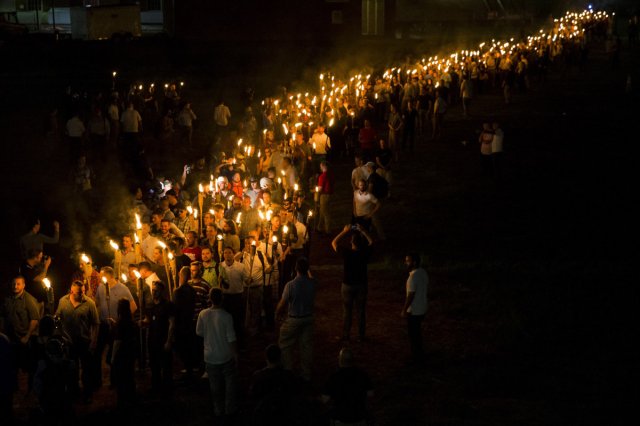 Vice News probably covered it best. In their 22-minute segment on the Unite The Right rally in Charlottesville, Virginia, they begin with the night prior. At the University of Virginia, a group of what looks like predominately young white men have equipped themselves with tiki torches that would normally line the entryway of a New Age cocaine party in Laurel Canyon. This is almost all someone needs to see in order to understand the anxious virility of America’s most ardent hate groups. They’re more caricatures of hate, bulking their shoulders out, adorning themselves with fashionable anger like they watched too many grainy t.v. reenactments of mobs marching into town to burn witches. It seems put on, overly contrived—after all, political anger is trending these days, like an emotional hashtag many are trying to embody. But toughness mostly died out with cowboy movies and the dawn of social media. Gangster rappers today star in family comedies, or at the very best, have inconclusive Twitter feuds with other rappers. White revolutionists don’t actually engage in any meaningful revolution—they buy tiki torches in bulk from Home Depot and grimace for the cameras to see, hoping their march, too, will go viral.

White nationalists, neo-Nazis, KKK members—they have preferred names they identify by, little different from the sexless liberals who want to be named by their preferred non-binary pronouns. You can imagine them stuffing their mother’s warm meatloaf in their underwear just out of boredom, or tying an earthworm in a complicated knot and calling it stupid for not untying itself. They’re the type of aspiring ogres who get ketamine enemas, drink a case of Natty Ice just with the boys, and talk about chicks and fags. Because, they are the most superior race, marching to reunify the New World as the proper land to spread their Vitamin D deficient skin, like they’re a race of milky cum ejaculating across the frontier. Nostalgia for Manifest Destiny, a cheapened romance about how cool your symbolism is.

For a minute, you think none of this actually real—the European colonialists enslaved Africans to build their homes and estates, they massacred the natives, they forced the Chinese to build the railroads, they stole an enormous portion of Mexico in the Mexican-American War, they elected a literal fascist. And they’re feeling at risk of becoming minorities. But it’s clear nobody is here to think historically and rationally. They just want to chant. The group marched towards the site of the statue of Confederate superstar Robert E. Lee, chanting things like “Jews will not replace us,” “Blood and soil,” and other hoggish self-immolating phrases.

At the site of the statue, there are counter protestors surrounding Robert E. Lee, as if, counter to all conceivable logic, they were the ones trying to protect the Confederate general. There is a back-and-forth of the two teams chanting Black Lives Matter! and White Lives Matter! at each other, like the shittiest rap battle ever, with only a three-word sentence they yell over and over. It’s the adult equivalent of booger-encrusted toddlers squabbling over which color crayon they like most in the crayon box. No, turquoise is prettier! Yes, we are horribly stupid beasts, gathering like armies of swine because it’s easier than engaging in meaningful conversation.

If the white nationalists had only read their Foucault they would have known that power is not obtained by ‘episodic’ and ‘sovereign’ acts of hostile coercion, but rather that power pervades society altogether, like an invisible and inevitable force of knowledge and truth. We’re engaging in little more than deadly food fights while the cafeteria itself is closing in. In Discipline and Punish: The Birth of the Prison, the French postmodernist compares the violent public torture of Robert-François Damiens for attempting to assassinate King Louis XV,  and the strictly enforced routines of prison inmates in the early 19th century. Foucault’s point is that the structural disciplines found in prisons, schools, hospitals, and military barracks are for the continuing subjection of all members of society. While the obvious public display of violence carried out by the state over its persons has subsided into an almost indetectable form, our subjection has calcified to the point of society as a whole is now far easier to coerce.

Where Foucault goes wrong is he illustrates power as a deep state enterprise, a consciously Orwellian command of design. It’s not. It’s far more Huxlian, in that apathy is self-imposed, and thus our petty squabbles erupt out of stupidity. In Brave New World, the World State is built by its worship of Henry Ford. The homogeneity and predictability of our lives are like that of the assembly line: we demand the cheap production and consumption of things. Books become meaningless. Soma, an opioid-like substance, is the stuff for the masses. Aldous Huxley’s grim novel takes place in AD 2540 (or 632 AF, for After Ford), but the picture today is already eerily similar: the commands of routine, our daily banalities—these have prevented us from a second Enlightenment, from the restless curiosities that elevate our inquiries for truth.

In the Vice News episode of the white nationalist rally (some have called it a ‘planned race riot’), the reporter interviews leading figures in the alt-right community, as well as overt racists and neo-Nazis. They sound paranoid, demonic, everything you’d expect from men with faces like stapled-back scrotums, who carry several concealed guns on them at any given time. It follows the car slamming into counter demonstrators, killing one and injuring twenty others; and the drearily amusing press conference the following day by Unite The Right’s organizer Jason Kessler: he was punched, chased through an overgrown clump of daffodils, and tackled by a woman, before being protected and escorted to safety by police. The most poignant moment was when in the protection of police, Kessler told a news reporter that the police were the reason things got violent, that they are the ones to blame. He was literally in their arms, hugged with protection from the State, criticizing them for not doing their jobs.

This is clearly just the beginning, something that has the potential to escalate into a full-out race war. The following rally planned is to be held at Texas A&M on September 11th, organized by alt-right meme-champ Richard Spencer. It was immediately canceled by A&M, but it will still undoubtedly happen. White nationalism isn’t some fart of anger that will dissipate after a bit of time; it’s not like the tepid protests of the Occupy movement that quickly died off, everyone returning home to watch porn on their iPads. It’s a deeply resolute ideology that only functions in a slavishly illiterate society.

Yes, the resurgence of white pride is partly bred and inspired by Trump—his encouragement for violence during his campaign rallies, his political legacy beginning with the Birtherism around President Obama, his defense of Klansmen and neo-Nazis during Tuesday’s address to the press—but he’s some blundering fool who’s proud he’s never finished a book. The phenomenon of Trump is testament to our solecistic era and the regression of human intellect. I’m sure Make America Great Again insinuates Make America White Again for some of his supporters, and perhaps for many who attended in support of the Unite The Right rally. But in our Huxlian world, the phrase completes the entirety of its substance. The vocabulary of thought has been reduced to three and four word chants.

White Lives Matter! was the most predictable reaction to Black Lives Matter. It’s an alliance of boorishness that says wait, what about us. Yes, it’s stupidly adolescent, but the dimming of the mind turns us back into tribal brutes who beat in the heads of the other colored team. Blame it on the opioid crisis, blame it on a weakened education system, blame it on religion’s hostility to scientific literacy, blame it on reaction to the terrible ideology of Islam, or the obsession of political correctness on the left—there’s many reasons for America’s resurgence of fatuity, and hence white nationalism, and its deep commitment to apathy of reason. Under Foucauldian analysis, we’re committing ourselves to being pawns of petty squabble under a power system of subjection and coercion. The capitalism of mass production turns us into predictable consumers.

While the press is scrambling to criticize the President for saying “many sides” were violent, instead of the “white nationalists,” as if this was the great fuckup that was going to finally due him in, or by enabling the neo-Nazis who marched to defend the statue of Robert E. Lee while chanting their hatred of Jews, the love of spectacle and outrage hardens its citizens into reliable consumers of political quarreling. It’s what Aldous Huxley shoved against, encouraging a more tempered nuanced literacy that might bring a second, much-needed Enlightenment.

One thought on “The Sad Truth About White Nationalism”