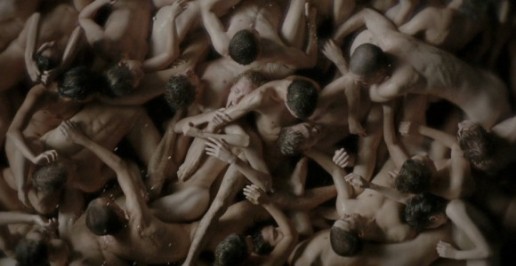 Hillary Clinton and Jeb Bush are leading the fight for the banality of encore. And news broadcasters are already discussing with what seems to be a real interest in the bromidic agony of it all, sitting around their florescent roundtables, candidly sipping their coffee in between the great points they make on whether or not Hillary’s blue suit was an intenerate attempt of the spectacle to attract the male subconscious, or if it was just something she put on. “Is Hillary woman enough to attract the female majority?” they ask. “Now that this country has shown it was ready for a black president, do you think it’s going to tell the world it’s ready for a female president?”

Hillary walks up on a stage, clapping her hands in some sort of crude beat of lethargic excitement. She points to a nobody in the crowd, waves to them, and throws her head back with laughter as if to say to the rest of the crowd that she just shared an inside joke with somebody. She claps some more, smiling a frantic Prozac smile, and then turns to the podium. She opens her mouth, her thick compound cracking under the heat of the lights. “Are we ready or what!!” she booms. And the crowd cheers, the dipsomanian frenzy for her novel gallant prose. “Yeah!!” the masses scream. Hillary smiles again. “I think we aaaaaare!” The crowd goes nuts. A woman with a heaving muffin-top jumps up and down, her enormous tits waving up and down like amorphous wrecks of gravity.

Jeb Bush has already framed his campaign as “JEB 2016,” admitting a very hip disassociation with his last name because it includes his brother and father. By not including “Bush” he knows the name is tarnished, shit-ridden, the hell of failure and corruption. Jeb is rebranding the Bush as a new-age cool dad  .  .  .  he’ll let you and your friends drink beer when mom is not around, he’ll talk about girls with you as he grills long hot dogs, poking them occasionally with his tongs, his cheeks flushed with too much sun, beads of sweat pushing through the pores on his upper lip. He’ll jerk off to Japanese anime porn, and then call his mother to ask how dad is doing. Jeb isn’t like his brother  .  .  .  he’s Jeb. He’s different from everyone else running for President because he’s going to bring jobs, fix our economy, and fight terrorism. The only truly appropriate question to ask Jeb is, “What country are you going to invade first?”

Clinton and Bush are important not because they openly support the further corporatization and militarization of the United States and the world, not because they are brittle automatons of fervor and crusade, but rather because they are the figures of feudal tutelage, of monarch and storm. Clinton and Bush are the promise of the return to the hereditary monarchical system. They both come from insurmountable wealth, they are both obviously from families of a more opaquely vulgar past: Bill Clinton more than doubled the federal prison population, more than the previous twelve years of Republican rule combined, he introduced NAFTA and the World Trade Organization and therefore the decline of US manufacturing, he repealed the Glass-Steagall Act which led directly to the 2008 economic collapse, he carried out various war crimes such as sending a couple cruise missiles to what intelligence knew was a pharmaceutical plant in Sudan, killing several tens of thousands of civilians, he acted beyond UN resolution, calling it “obsolete and anachronistic”, thus rejecting all international law, he bombed Somalia, Yugoslavia, Iraq, Afghanistan, Albania, Croatia, Bosnia, Haiti, Yemen, Liberia, Zaire. Then he was impeached for lying about a blowjob. George H.W. Bush aided the Guatemalan military’s genocide of its Mayan populations, he invaded Panama partly in order to kidnap Manuel Antonio Noriega and charge him with warcrimes (most of which Noriega committed on the CIA payroll), he invaded Iraq, including Iraq’s infrastructure, which qualifies as criminal under the laws of war, he vetoed all Congressional attempts to reinstate the Fairness Doctrine—the FCC policy that required all tv and radio broadcast to devote some time to controversial issues of public importance as well as opposing views on those issues—he appointed Clarence Thomas to the Supreme Court, and he added more than a trillion dollars to the national debt. George W. Bush choked on a pretzel, among other fuck-ups. Prescott Bush, the late Senator and grandfather of George W, financially supported Hitler’s rise to power, his company’s assets eventually seized in 1942 under the Trading with the Enemy Act.

The point of all this is that when power becomes hereditary is when tyrants rise and nations fall. Monarchy, at its disgusting putrid heart, is a primitive and banal mechanism of rulership. It’s what the United States fought to free itself from during the American Revolution. One such dissident of hereditary monarchy—perhaps America’s only true revolutionary figure—Thomas Paine, describes the monarchical system as “a system of mental levelling. It indiscriminately admits every species of character to the same authority. Vice and virtue, ignorance and wisdom, in short, every quality, good, or bad, is put on the same level. Kings succeed each other, not as rationals, but as animals.” There is no weight to the moral and rational character of a woman or man who is escorted to the podium of authority because of his or her’s hereditary past. Runny-nosed children can become kings over the strong brooding judgement of some women or men. The idiots can and do rule. Without the rational and moral judgement of one’s character, the sycophantic cornfed fuckery of a population rules armies, conducts trade, fights terrorism. Paine continues on this: “Can we then be surprised at the abject state of the human mind in monarchical countries, when the government itself is formed on such an abject levelling system?” Erecting a man to power simply by means of hereditary succession is evident of the death of the imagination. It’s a primordial boorish symptom of the current condition of the human mind. Paine’s writing itself is signatory of where we are today: Common Sense sold as many as 500,000 copies in its first year, with a mere 2.4 million person population in the colonies at the time, many of whom were illiterate. An unprecedented bestseller. Paine consciously wrote with a base simplicity in order to attract the largest audience, and was accused of writing a vulgar form of language at the time, and yet his prose and eloquence is unmatched today. Today, we have wet rat-like figures such as Russell Brand, soaking the articulation of argument with his greasy hands. In his book, somehow titled Revolution, he articulates, “I mean in England we have a Queen for fuck’s sake. A Queen! … Like she’s all majestic, like an eagle or a mountain.” Brand, according to some carious despondent masses, is the voice of a generation, whose revolutionary approach to politics were first popularized by telling everyone not to vote. He is all spectacle, a feverish spasmed charisma of the pseudo-world of love and passivity and cool bracelets. Brand is, as Guy Debord calls it, “the sun which never sets over the empire of modern passivity.” He is the bright unnuanced personality that decorates our modern passivity with the pseudo-passionate. “The spectacle is the guardian of sleep,” Debord continues. It makes us excited to not do anything, for kids to badmouth the government as they sip IPA’s and wear fedoras. It is as much the fault of the spectacle as it is of the tyrannical that we admit powerlessness.

Before Paine, “democratic,” or “democratical,” as it was termed at the time, was always used as an insult, a reference to ochlocracy or mob rule, or mobile vulgus, which as everyone knows is Latin for “fickle crowd.” Paine instilled democratic independence as the only reasonable incontestable approach to freedom, to the specific and unadulterated innate freedom in all humans. Freedom is the landmark goal of democracy and its deathless fight against tyranny. Paine denied ever reading John Locke, but along with Thomas Jefferson, he almost certainly did. In his Second Treatise on Civil Government, Locke names our natural rights as the right to “life, liberty, and property.” Jefferson, with Paine at his side, inverted this to name “life, liberty, and the pursuit of happiness,” as the innate necessities in all humans. Anything in opposition to this is the heaving vulgar tit of death. Monarchy is the tit of death. Hillary Clinton and Jeb Bush are each a separate tit of death. Citizen’s United is the tit of death. The Koch Brothers are the tit of death, as are Ted Cruz, Scott Walker, and Marco Rubio, who are traveling to Southern California in early August to beg 450 of the wealthiest conservatives for campaign money. The Keystone XL Pipeline is the tit of death. Hydraulic fracking, the TPP, Shell, ExxonMobile, Halliburton, Lockheed Martin, Boeing, JP Morgan, Tila Tequila, the war on drugs, privatized prisons, chihuahuas, the Church, Trump, plastic fruit, fake flowers, the militarization of the police, they are all bloated varicosed tits of death, throbbing at the edge of humanity. They hate freedom. More than anything else on the last remaining bits of green earth, the present oligarchy hates freedom. Because with freedom is power. Immanuel Kant writes that power is “the absolute spontaneity of freedom.” Because true freedom is unpredictable and dangerous  .  .  .  it is the song of the beautiful masses that makes kings tremble. Freedom is a beautiful woman I’ve seen, even touched in passing, but never been able to hold forever. It is the marvelous sky of humanity, a great body convulsing in orgasm on the shore. It is what all men want, but, by its own nature, will never have.

Paine knew the absolutism of freedom, and urged to include the abolition of slavery into the Constitution, to redeem us from our original sin, but was denied. Because slavery was essential to the order of the new Republic, as it of course still is. George Washington became one of the wealthiest men in America by speculating on Indian lands, by seizing enormous swaths of native land and then selling them. Today, student debt is critical to keeping the educated masses passive. By the time of Paine’s writing Rights of Man, in which he attacks organized religion and its absurdity of the facade of authority, he was consequently vilified by his countrymen in the first major media hunt of a public figure  .  .  .  he was called an atheist (he was a deist), he was called an enemy of the new Republic, a malodorous individual always soaked in gin. He died penniless in New York City, with six people attending his funeral—three of whom were black. The true revolutionary figure, by its very definition, cannot be popular. But he can be right.  In his Wages of Rebellion, Chris Hedges writes, “I do not fight fascists because I will win. I fight fascists because they are fascists.”